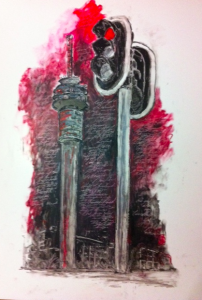 This new painting of the Hillbrow Tower, completed this evening, is unusual in that it’s the first time I’ve included a structure other than a building in my cityscapes. But a city of cars is also a city of traffic lights or, as we South Africans call them, robots. Nobody ever wants to see a red robot unless we want to dash off a quick tweet.

Here I play with scale so that the traffic light is in the foreground and larger than the tower, which disappears beneath the horizon. The text consists of tweets about Joburg traffic from @PigSpotter and @AkiAnastasiou as well as the names of roads and statements about taxis, road rage and Outsurance pointsmen. In other words, just another day on Joburg’s roads.

This piece will be framed this week and up for sale at Velo by Saturday.