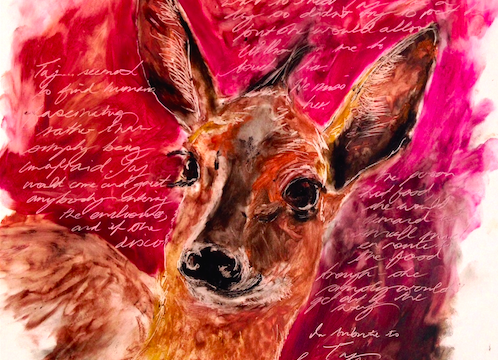 A portrait of an uncommon duiker

This is Taj, a much-loved common duiker. Common duikers are, well, common. According to Smithers’ Mammals of Southern Africa, the Common Duiker, Sylvicapra grimmia (Linnaeus, 1758) ‘avoids predators by lying quietly and dashing away at the last moment. Runs with a distinctive diving, zig-zag motion from which comes the name duiker, Afrikaans for diver…’.

This worked was commissioned by William Saunderson-Meyer and Karen MacGregor, who welcomed Taj to their farm near Karkloof after she was released from a wildlife rehabilitation facility. When I initially received the commission, my instinct was to represent an uncommon duiker as a member of her species. But as William and Karen shared anecdotes and photographs, I realised that the task was not about representing a duiker at all – but a portrait of an individual.

This was the photograph I chose to use as a reference. I loved the jaunty hint of a smile, the bright eyes, the alertness. 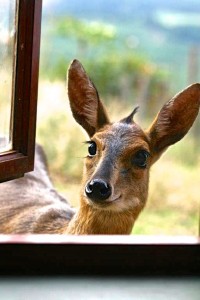 I included Karen’s description of Taj’s unique personality  in the work by writing it with a used pen into the paint:

“…she seemed to find humans fascinating rather than simply being unafraid. Taj would come and greet anybody entering the enclosure, and if she discovered the person had food, she would demand a small snack en route to the food trough – she simply wouldn’t get out of the way, and would even lift onto her back legs to try and steal pellets out of the food bowl. My belief was that this was not about being hungry, but about interacting. Taj seemed always interested in what was going on around her.”

Taj died mysteriously last year; William and Karen suspect she ate a poisonous plant.Their house is filled with the most wonderful contemporary art as well as Zimbabwean sculpture, so I decided to include plenty of warm tones in this work.It’s relatively loose and impressionistic – lipstick is not a good medium in which to attempt absolute precision. Finding the right colours for Taj was not a problem, as I have loads of browns of various shades.

I had the painting framed by my regular framers next to the Herbert Evans in The Zone, and my husband and I delivered it to its new home this weekend on our way back from Durban. I like the thought of Taj looking down on the humans who loved her even though she is no longer around, and remembering her for what she was: an uncommon duiker. 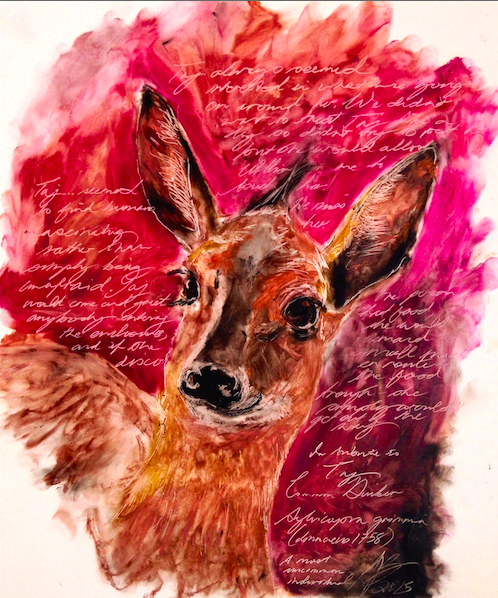