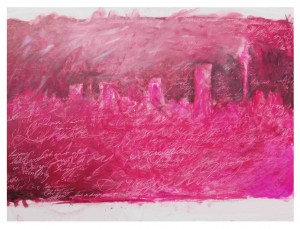 The text in most of the cityscapes refers to roads, and there is a good reason for this. Johannesburg is a city of cars, and all of this art was quite literally inspired by the Pulse of the City campaign for the Range Rover Evoque. If it weren’t for Land Rover and my involvement in that campaign, none of this art would exist – hence the title of this exhibition. It started in August 2010 when a brief came through from The Brooklyn Brothers, a London PR agency. To promote the launch of the Range Rover Evoque, the Pulse of the City campaign was developed. Various cities around the world would choose four City Shapers who were well-connected in social media, and would serve as brand ambassadors.

I was very lucky to be selected as one of four Johannesburg City Shapers, along with fashion designer Craig Jacobs, actress Hlubi Mboya and GQ associate editor Siphiwe Mpye. To thank Land Rover’s marketing manager, Roland Reid, for choosing me, I presented him with a painting to commemorate the campaign. It was this that led to all of the work that you see in the exhibition.

Though I have been painting with lipstick since late 2002, it would never have occurred to me to attempt a cityscape were it not for that gift. So this exhibition represents an unusual example of where a brand has quite literally inspired art, but outside of the usual confines of a brief from a marketing campaign. All of this work arose organically out of a deeply felt connection rather than a PowerPoint slide, which makes it all the more meaningful.