The cityscapes are paintings not so much of Johannesburg itself but how I feel about the place where I have spent most of my life. I’m a child of the northern suburbs, which has shaped my relationship with the city to the south in important ways. People who meet me for the first time are surprised to discover that I am Johannesburg born and bred, because I don’t sound very South African. (I changed my accent when I was 10; I was a strange child.)

All of the work here features the iconic Joburg skyline, notably the Hillbrow Tower. Sometimes I focus on capturing it more precisely, as in The Tower of Babel; at other times it’s more a suggestion, a stab of colour into the sky. 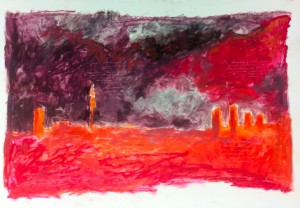 The Hillbrow Tower has become visual shorthand for the entire city. As I wrote on my Thought Leader blog in January this year:

Skylines define cities. We forget this sometimes, because we live amidst the concrete towers and navigate along the streets, our eyes fixed on the next set of robots. We focus on detail; to appreciate a skyline you need distance. Since I work in a messy, imprecise medium – lipstick, which is why all of this work is so red – I need iconography that signals, even to a casual observer, that I’m depicting my ideas about a particular place.

Once I’ve defined the space with the horizon, with its arrangement of towers and the notched outlines of buildings – as Raymond O’Connor who frames my work observes, the pattern it creates looks very much like the pulse of the city in an angiogram –  I can move into exploring the emotional content of the place.

I have a love-hate relationship with Johannesburg, as many of us who grew up here do. Some works are expressions of ridiculous joy, as in Irrational Exuberance; others allude to the creative animal energy of the city before the storm, as in Electric Storm I and II.

It is that moment before the electric storm, when the air is filled with the tang of ozone. It is every cell that shimmers with possibility, the weight in your gut, the sense of a world unrolling before you to the wide horizon and beyond. It is to feel plugged into a mysterious current that powers your belief in yourself and your capacity to take charge of your own destiny.

Each of these cityscapes features a different emotional landscape. Study in Pink and The Red City are both me at my most even-tempered; Irrational Exuberance and Joburg Storm at my most optimistic. Though the colours of Panic are relatively mellow – pinks and browns – this was painted as an attempt to stave off one of the severe anxiety attacks I suffered for the whole of 2010 and some of 2011.

Ghost City is the only work that contains no writing; the black cardboard makes any inscriptions impossible to see.  I like the way the city seems to emerge out of the dark, this hard concrete place appearing strangely insubstantial. There is of course a rather obvious dichotomy at the heart of painting such a hard, unforgiving place with lipstick, and this sets up an irony which I enjoy.