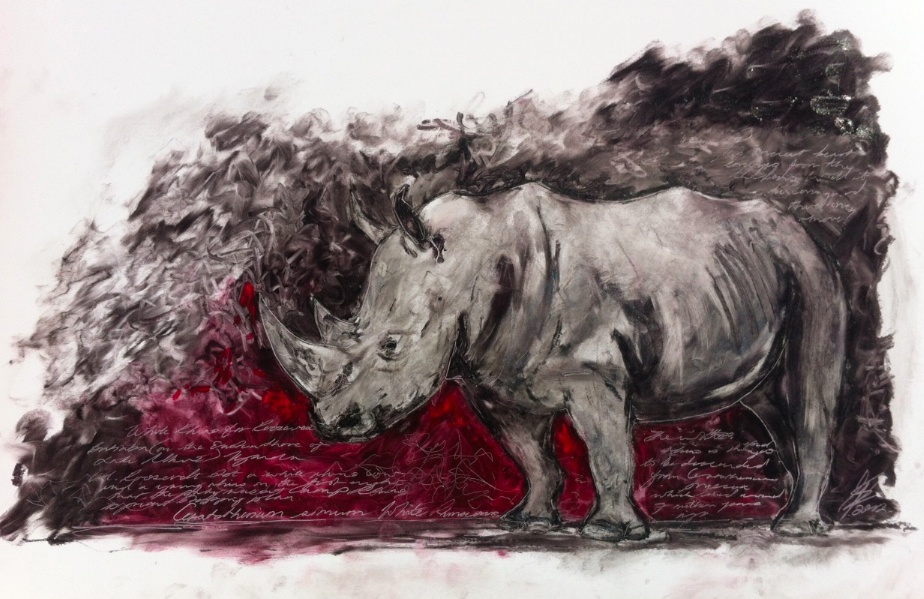 Today I was asked to donate a rhino painting to a golf day dinner in aid of the SAB-Boucher non-profit company which is raising funds for the DNA profiling of South Africa’s rhino population by the Veterinary Genetics Laboratory (VGL) at the Faculty of Veterinary Science, University of Pretoria at Onderstepoort. A DNA database is an essential element in the fight against poaching: if you don’t know where a horn is from, it makes tracking the illegal trade very difficult. If trade is legalised, as many argue is the only sustainable solution to the escalating rhino poaching problem, then the DNA database will be central to managing it.

This is the resulting work, painted this morning. Again, I’ve depicted an animal emerging from the shadows, surrounded by writing from various sources, among them this report on Teddy Roosevelt’s African expedition. To heighten the drama, I’ve added a touch of bright red to the greys and blacks.

The painting will be auctioned on Friday night. The aim is to raise R1 million for Our Rhinos in Safe Hands, which is a joint project between SABMiller and South African cricketing great Mark Boucher. As it so happens, I’m working on this project with Quirk as a freelance strategist, so this is one of those rare but always gratifying opportunities to bring one aspect of I do together with another.