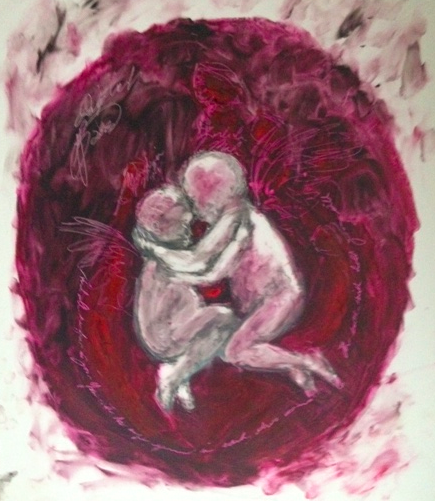 You will be safe forever in each other’s arms

The earth will hold you still

And all the fear is gone.

Another weekend, another murder, another afternoon where I felt compelled to paint my response to it. This work is in memory of two-year-old Yonelisa Mali and her three-year-old cousin Zandile.

It was impossible to feel indifferent when I first heard about the discovery of these two little, little girls in a communal toilet in Diepsloot, not so far from where I live. They were buried yesterday.

The facts of the case where horrible enough: Yonelisa and Zandilewere kidnapped, raped, murdered and mutilated. But I felt a personal connection, too, because my mother’s housekeeper, the woman who also takes my grandmother her lunch every day, lost her five-year-old niece in similar circumstances – possibly to the same killer.

Nothing much was done then, but now the outrage has turned this into a perfect political platform, a stage on which all the familiar dynamics in the tragicomedy that is South African politics play out: the xenophobia, the helpless anger looking for an outlet, the opportunism, the promises.

I wanted to depict Yonelisa and Zandile safe from harm in each other’s arms, the earth holding them like a mother’s hand. I used my own hand as a model for the sketch and left the shape vague so that you have to look quite hard at the finished work to make it out.This is the process from initial sketch to the first colour:

I sketched wings for them because wings symbolize freedom and the overcoming of the sordid circumstances of their death.

Perhaps my painting this and sharing it with you is opportunism too. I was accused of as much on Facebook by someone who assumed that the red in the painting is blood (it isn’t, though I understand why someone might think that).  Lawyers Against Abuse, the NGO for which I regularly raise funds, works primarily in Diepsloot to ensure justice for the victims of gender-based violence. I’m working on several new pieces for an exhibition in November – watch this space as I’ll be donating a portion of sales to LvA.